Sabine Heuck is an artist who allows the world to pervade her. Looking at her pictures is like walking along houses or trees and suddenly catching a glimpse of the far distance in a space between them. Fleeting impressions, combining lightness and depth.

Sabine and I like to see ourselves as homeopathic cousins. Not related by blood, we still belong to the same family. We virtually grew up together, in a small town in the state of Schleswig-Holstein. A castle, a pedestrian area, houses situated to the lakes. Her parents’ garden seemed infinite and enchanted to our little selves. There’s a narrow path leading to a landing stage at the lake. Ospreys circle at the sky over the island. Daisies, and the scent of newly mown grass drying in the sun. We were Lindgren's "Children of Bullerbü". When I try to bring back my first memories, there’s one thing I hear: Sabine, laughing! Shortly after, I feel crackling energy, mesmerizing everyone and everything around. You feel privileged being with her, because the world gets more intensive – the lush outburst of spring, the searing summer heat, the paleness of autumn, and the glittering iciness of winter. 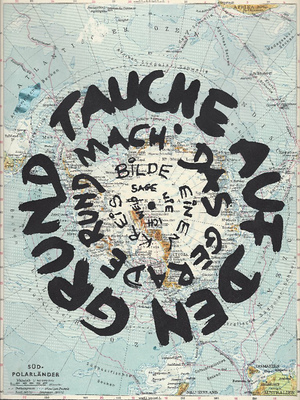 Sabine Heuck didn’t confine herself to the idyllic world of Bullerbü. She has always had the urge and the talent to look beneath the surface. “Tauche auf den Grund” (“Get to the bottom”), so she says in a line of words that gradually spirals down over a world map until you’re not sure if the words become smaller or the world grows bigger. To this day, Sabine and I can’t sit together on a landing stage and watch the sun go down without poring over most intricate global problems, flinging ourselves in an abyss of dystopic visions, or cracking macabre jokes. Sabine is famous for her black humor, which never drops to cynicism.

“Mach‘ das Gerade rund” (“Make the straight line curl”), I read on, craning my neck to follow the text spiralling down. Being with Sabine, strange things may happen to you. Sometimes the atmosphere charges, gives reality a twist. Then, a tube train would end up on a disused line, along with all its passengers. German-Thai karaoke battle in Berlin, on New Year’s Eve. Loud singing emanates from the lift of a nursing home. Lovers who thought they had long since lost each other suddenly meet again. Sabine takes these twists of reality calmly, knowing each is just one truth amongst many.

Nobody can constantly be permeable, or else would disintegrate, at last. So civilizations invented mechanisms to teach us our limits, established rules for us to follow, and routines to keep us down-to-earth. It’s like tying hot-air balloons firmly to the ground to keep them from flying off. Only few people muster the courage to cast off at intervals and still land safely again. Sabine Heuck is a pioneer in spiritual air travel. The pictures she paints give an idea of what she sees and feels when she’s floating in the air and looking at life on earth.

Translated from German by Ingeborg Pries